As the ticking minds in Basel, Switzerland convene for another day of BASELWORLD 2011, TGT brings you the digested details of the most anticipated trade-show in the watchmaking industry.

The Hublots, Cartiers, and Jaeger LeCoultres are all present, however it is the revelations of a select few that grasp our attention. Those contenders are Rolex, Bell & Ross and Patek Phillipe.

Rolex brings three new changes to their mens line, but a large change for the Explorer II watch. Following through with their gravitating propensity to scale up most of their mens Professional Series watches, the Explorer II is subject to just that. Starting with the Submariner and the efforts to enhance its presence by enlarging lugs, crown, markers and hands, the Explorer II has experienced the same, but now features the additional enhancement of a 42 mm case for its never-before-seen movement, the 216570. Additionally, in subtle homage to the 1970s Explorer II “Freccione”, it features the same Emergency Orange color 24 hr hand of its ancestor. All and all, a becoming revamp on a classic while still offering a distinctive nod to heritage.

The Yachmaster II features the first ever combination of Everose (their non-fading rose gold treated with platinum) and 904L steel on a Rolex, hereforth known as Everose Rolesor. Yacht not included.

Hammering to the beat of a V-12 turbocharged engine, is the beautiful Rolex Daytona Reference 116516LN. Outfitted in Everose gold and the unscratcheable black Cerachrom bezel and chocolate colored dial, you will find yourself struggling to keep your eye on the road with this baby strapped to your wrist.

On a more whimsical note and certainly less practical, is the yearly release of Bell & Ross’s special edition design. The Bell & Ross Red Radar, features the same ETA 2892 that most BR-01 models carry, but with a new face. The face is reminiscent of an aircraft gauge with low light radar backlit screen. Interesting – that is all we can really say.

Meanwhile, Patek Phillipe reveals a new horological solution to the seasoned Gent, the Patek Phillipe “Triple Complication” Ref. 5208 to join the collection of Grand Complications. The Triple Complication features the first ever combination of a chronograph, minute repeater and instantaneous perpetual calendar with aperture displays. Housed in a 42mm platinum case, is a mechanical self winding movement. For those of you looking for the second pusher on the chronograph, the above button is a “monopusher” with dual functions. As expected, a watch like this comes with a crystal case and standard case back.

And finally, we conclude with a fitting masterpiece of sorts – Patek Phillipe’s Reference 5270G Perpetual Calendar Chronograph. A watch with even more complications than visual appeal, the 5270G is a force to be reckoned with. The movements feature day/night, leap year, month and day counters along with the chronograph movement and a 30 minute counter. Offering the first spin off of the in house 5270 Perpetual Calendar Movement, the new 5270G is expected to become the mainstay in the line, rather than the variant. Practicality aside, the price tag on this little duesy sits at a pleasant $155,700. The model shown is in white gold and houses the 5270G in a 42mm case. 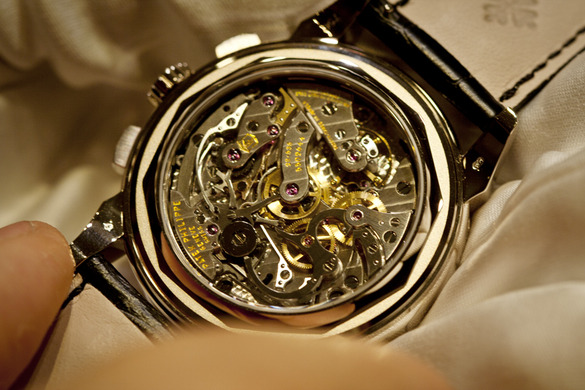 Editor’s Note: None of these photos were taken by TGT. Rolex and Bell & Ross images are promotional material. While Patek Phillipe images are from the folks at Hodinkee.