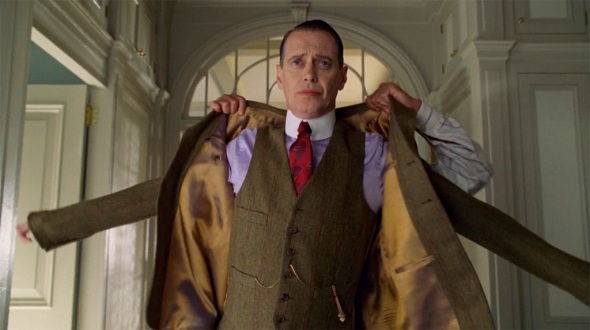 With the unexpected hiatus of Mad Men, it is safe to say Don Draper has taken yet another unexpected leave of absence from the offices of Sterling-Cooper-Draper-Pryce. This said, we maintain that the man on celluloid to be directing the style trends of the year, may well be the second best dressed man on television – Nucky Thompson.

The expertly designed costumes of Scorsese’s hit HBO series Boardwalk Empire, are brought to life by the wiry edge of Steve Buscemi as Nucky Thompson. As the cast of Mad Men step aside, Nucky takes center with his muscle close behind, or even, dare we say –  side by side. Michael Pitt embodies the character of Jimmy Darmody, a troubled Great War vet and tenacious young man enlisted as the muscle of prohibitioner Nucky Thompson. Fueled by his desire for success at all costs, he soon develops the taste for the bespoke suits of his successful contemporaries. In effect, the production has found itself with a late-bloomer of types, for the stylistically savvy duo to direct men’s style trends. END_OF_DOCUMENT_TOKEN_TO_BE_REPLACED